Posted at 14:08h in C3 by admin 0 Comments
0 Likes
My last post seemed to generate some interest so I am following it with this which occurred Sunday night. I do believe that the discussion and implementation of missional ideas and practices is just beginning. Experimentation and retooling are words we had better get used to.
The fact is that unreached tribes make up most of our culture. When we focus on being attractional we see these tribes as competition because we want them to leave their tribe and join ours. But that’s not how successful missions work accomplishes the goal of growing the kingdom. We cannot merely put on native clothes in order to infiltrate the new tribe. We must have genuine love for people, and be willing to spend time with them.
Our Faith in Action team of 25 (including teens and children) met at 6 pm for prayer and the Word before heading out on four mercy missions. I shared Luke 14 -the Parable of the Great Supper -to give foundation to our task of going into the highways and hedges. We also included our prayer team, who remained at the church to intercede for our work.

Space does not permit me to elaborate on the amazing God moments experienced by the three smaller groups we sent out. But the group I was leading discovered a second lost tribe of young people at a local skate park. It resembled “Lord of the Flies” as there were no adults in sight, and there was an aboriginal feel to the place.

We first set out for the park where we discovered the “Ultimate Fighting” tribe a few weeks ago (see earlier post). They were nowhere to be found. So we cleaned up the park again and talked and prayed with a group of five who were playing basketball. They seemed embarassed, but grateful as we gave them each a 20 oz. ice cold energy drink. 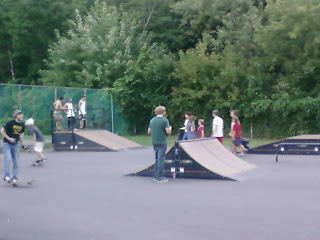 Next we headed to the skate park. A notoriously dirty and dangerous place. It was filthy, but the tribe of about 30 skaters between the ages of 11 and 20 seemed oblivious to their surroundings. We began sweeping and picking up, waiting for a chance to speak with some of them. We had only 19 energy drinks to give out, but with 30 kids there, I was afraid giving them out would start a riot, so I began to ask the Lord what to do.
Then it became clear to me that I could stand in the middle of the park and hand the drinks out to those who answered questions I would ask. It was a bit risky, but I ran to the van and got the cooler. I summoned anyone who wanted an energy drink to come close, and instantly had a group of 15 hanging on my words. (the older “cool ones” did not come around, it was mostly the younger ones) 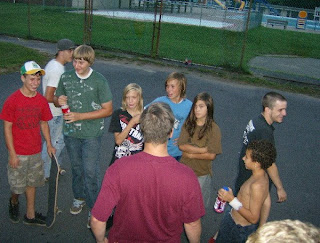 I proceeded to ask them general Bible questions off the top of my head. “Who was Moses and what was the most important thing he did?”, “Name one thing Jesus said,” “Who was Judas and what did he do?”, and so on. It was electric. These kids were thinking and talking about God. One kid recited the entire Lord’s Prayer. They came up short on John 3:16, but it gave me a chance to tell them about it.
The spontaneous atmosphere, and incarnational character of what we have been doing opens the door for the Spirit to do more than if we had stayed in our church box. It also gives more value to the times we do meet for worship and teaching because that’s where we get fueled for the mission.
As we were leaving some of the boys came and said thanks for cleaning up, and for the drinks. I am hoping they will begin to take pride in the place and keep it clean themselves. Then one of the boys, who was wearing a Led Zeppelin t-shirt, came up to me and said, “I think you were my pastor when I was a kid.” I thought he looked familiar, and it turned out to be Georgie. His family had left the church in a split a few years ago, but George always sat up front and loved to be in church. It was great to reconnect with him, and I think something stirred in his heart. I know something stirred in mine.
1 Corinthians 15:58 With all this going for us, my dear, dear friends, stand your ground. And don’t hold back. Throw yourselves into the work of the Master, confident that nothing you do for him is a waste of time or effort.