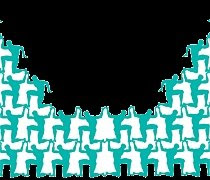 Some futurists and cultural observers are positing the demise of the familiar Bell Curve which charts normal distribution and the ascendency of what is being called the Well Curve. Some have said that this only happens in times of great social upheaval and transition.
In modern times it was a given that there was a large middle and smaller extremes. The middle class was the norm, with the very rich and very poor at the fringes- smaller in number.
The theory of the well curve assumes that the middle has been slowly disappearing, and the extremes are on the rise. This is hard to argue with when you consider the evidence in education (achievers and dropouts), economics (rich and poor), technology (small and big), politics (liberal and conservative). There are examples in almost every aspect of life.
I heard Leonard Sweet touch on this at a conference last year and was intrigued. I looked for signs of this phenomenon in church life and the news. I am seeing more evidence as time goes on. The megachurch movement is an example. It seems we are seeing rises in large churches which value diversity and excellence, and also in small and house churches which value community. The “plain vanilla” church with little to distinguish itself, is becoming less attractive. I spoke with a seasoned ministry pioneer recently about a church plant in a certain community and he said the only thing that would work would be something that had “an edge to it”. That’s the edge of the well curve as I see it.
It seems this is already affecting our churches as we have some folks who are very involved in our mission, and others stay aloof and merely attned on Sunday. Some churches are doing away with membership, while others are raising the bar or providing options for membership.
Perhaps this explains the difficulty many churches are having with maintaining a viable Sunday School. It is based on a premise that everyone wants the same thing on Sunday morning. Vanilla is no longer the preferred flavor- everyone wants a custom flavor.
I think this is something to watch in the days ahead. There may be adjustments we need to make to maintain our “edge”. I think Jesus lived there!